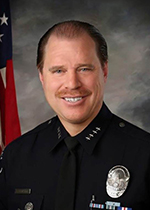 Chief Carl Povilaitis was appointed to Police Chief on May 1, 2018.  Carl has been serving the Glendale community for the past 27 years. He began his career in law enforcement with the Glendale Police Department in 1990 after graduating from the Los Angeles Sheriff’s Academy class 267 in February of 1991.

Carl participates and volunteers for a number of clubs and non-profit organization boards within the community. He serves as Board Member for the Glendale Educational Foundation, the community board of Glendale Memorial Hospital, and is an Associate Board Member of the Glendale Chamber of Commerce.  He served as a Commissioner representing the City of Glendale on the Burbank-Glendale-Pasadena Airport Authority from 1999-2009. He has also serves as an Adjunct Faculty Member at Glendale Community College. 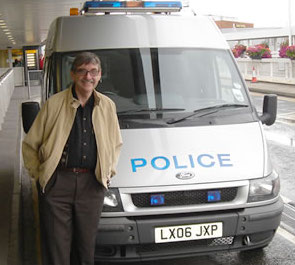 Gordon Graham is a 33 year veteran of California Law Enforcement. His education as a Risk Manager and experience as a practicing Attorney, coupled with his extensive background in law enforcement, have allowed him to rapidly become recognized as a leading professional speaker in both private and public sector organizations with multiple areas of expertise.

In 1973 Gordon was selected as a candidate for a major west coast law enforcement agency. Thereafter, he proudly served as a motorcycle officer for most of his first ten years in the Los Angeles area.  In addition to his patrol work, he helped design the first DUI task force, assisted in the development of the DRE (drug recognition program), was an instructor in the initial “Mod I and II” Haz Mat program, and wrote his first of many technical papers: “PCP–An Officer’s Survival Guide.”

After completing his Masters, his off duty time was then spent at Western State University School of Law, where he was graduated in 1982 with his Juris Doctorate.  He passed the California Bar Exam the same year and opened his law offices in Hollywood, where he focused his efforts on family law, immigration and personal injury work. 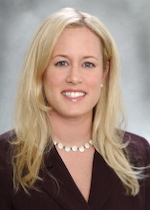 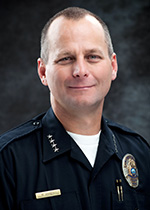 Robert Handy was appointed Chief of Police in Huntington Beach on December 7, 2013. Since arriving in Huntington Beach in 2013, Chief Handy has worked with the City Council to increase staffing, resources and technology for the Police Department. Under Chief Handy’s leadership, the Department has significantly increased its use of technology to enhance crime prevention and intervention. The implementation of in-field reporting along with data driven decision making has increased effectiveness and improved efficiency throughout the Department which helped lead to reductions in crime. 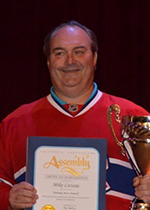 Mike Lozeau served in the California Army National Guard as a Military Police Officer beginning in 1986 until his honorable discharge in 1989. He was sworn in as a police officer for the City of Tustin in July 1988, then joined that Anaheim Police Department in 1990. While serving the Tustin community, he received an award for a large drug bust resulting from a vehicle stop. As a police officer for Anaheim he worked several specialized assignments; K-9, SWAT, Field Training Office, Family Crimes and Sexual Assault Detective Details arresting several sex offenders in our community.

He was promoted to sergeant in 2001 and has supervised several specialized assignments; K-9, Under-cover Vice, Burglary and Central District Community Policing Team. He assisted in one of the largest illegal massage parlor operations across the County of Orange which included human trafficking of women. 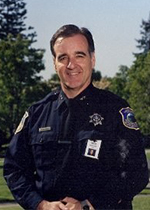 Chief of Protective Services, County of Santa Clara
Protective Services is a department within the Santa Clara County Health and Hosptial System. They are first responders to incidents particularly at the large County Hospital Campus. Officers proactively secure the campus and actively intervene in security incidents. 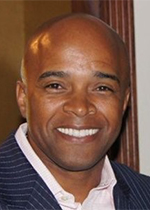 With more than thirty-two years of loss prevention experience, Larry is a highly respected industry executive, currently serving as the Vice President of Asset Protection, Inventory Analytics & Compliance for the 99 Cents Only Stores. Given his faith-based, charity and non-profit work, and in addition to serving as a law enforcement chaplain (10yrs.), Larry has been entrusted to lead all of 99’s community efforts involving homelessness, recidivism and the disruptive customer. 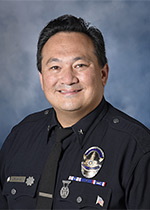 Commander Don Graham was born in Manhattan New York and spent most of his childhood growing up in Bayonne, New Jersey. During his last semester at Los Angeles Valley College, Don went to work at the Campus Police Office and discovered a new way to serve his community. Enamored by the strength of character and integrity he found in the retired Los Angeles Police Department officers that made up the campus police, Don decided to follow that path of human discovery and was hired for the 11-95 Academy Class of the Los Angeles Police Department.

On July 31, 2019, Don was sworn in as a Los Angeles Police Commander and appointed by Chief Moore to be the Department’s Homeless Coordinator under the Office of Operations.

Don earned a Bachelor’s of Science in Business Management and a Masters of Business Administration, both with honors, from the University of Phoenix. He has completed the Los Angeles Police Department’s 21st Century Leadership School and was elected Class Speaker for Class 292 of the Sherman Block Supervisory Institute. Don lives in the San Fernando Valley area of Los Angeles where he plies his most important trade, husband and father.

Sergeant Kyle Campbell began his law enforcement career at the University of Georgia in 1996 while he was studying for his Master’s Degree in Political Science. He left the University to join the Los Angeles Police Department in 1998 and has taken assignments as a Patrol Officer, Field Training Officer, Police Academy Tactics Instructor, Field Sergeant and Administrative Sergeant.

His administrative assignments include Patrol Adjutant in two divisions, Inspection and Control at the Department Operations Center and his current assignment as the Operations-Valley Bureau Training Coordinator where he and his staff are responsible for risk management and training compliance for seven geographic divisions which comprise almost 2000 police officers. 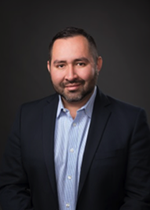 Ivan Villegas is Branch Manager for SOS Security and oversees security operations in the San Diego, Orange, San Bernardino and Riverside counties. Previously, Ivan was the Managing Director of OmniPresent Security Group, a workplace security consulting firm, where he served as chief developer and primary trainer for programs designed to heighten security and situational awareness with an emphasis in workplace violence prevention.

Ivan is Board Certified in security management and is an active member of ASIS International, Society for Human Resource Management, ATAP, and Infragard. He volunteers as a Steering Committee member for the city of L.A.’s Run Hide Fight program and is also a mentor for the ASIS Region 1D CPP Review Course. Prior to joining the private security industry, Ivan served in the United States Army as a Sergeant where his specialty was physical security assessments and route security. 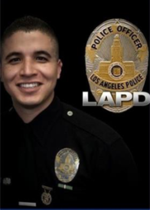 Officer Isaac Burciaga is a tenured police officer with more than 13 years of law enforcement experience. He has worked various assignments during his career as a Patrol Officer, Professional Standards Investigator, Lead Officer, Terrorism Liaison Officer, Background Investigator and is currently assigned as Assistant Training Coordinator for the Los Angeles Police Department, Security Services Division, with a mission to ensure the safety and security of elected officials, employees and the public.

Officer Burciaga continuously strives to achieve the highest level of quality in all aspects of his work. He is committed to career development and education. He is a certified California Peace Officer Standards and Training (POST) level II instructor. In addition to his instructional certification, Officer Burciaga has expertise in Physical Security Vulnerability Assessments and holds a Crime Prevention Through Environmental Design (CPTED) professional designation from the National Institute of Crime Prevention. He has instructed and coordinated numerous training programs for sworn police officers and civilians including subjects in 832-PC Powers of Arrest, Frist Aid/CPR, Driver Awareness, Active Shooter Survival, and Workplace Safety and Security.